☆
Do not let anybody shatter your dreams

I originally entitled this commentary “stop killing the dreams of young scientists” but then I realised that my target audience is the young scientists themselves (you!). Thus, the change of title. BTW, when I talk about young scientists, I refer from students to professors who are willing learn new things – to me, titles are irrelevant as we are all continuously learning so that makes us all students.

I have been in academic circles for several decades - in fact, I have lived through more than 5 decades, two centuries and two millennia - and I have seen my share of things happening. While some I could consider “normal” human behaviour, there are some that I consider unacceptable.

The first story takes me back to the time when I was a PhD student in the UK. There my friend Dave (not his real name) was also doing his PhD but at a different department. He was frustrated that his supervisor would provide him with some samples that had to be run in chromatography plates (TLC), these plates should then be exposed to x-ray films for up to weeks. Once developed, the films were invariably blank. Dave brought these films week after week to his supervisor’s office. As he tried to explain to himt hat there was nothing in those films, he was just told to “leave them on my desk and take the next samples”. Dave had no idea what those samples were, what he was doing or why. We (friendly colleagues) suggested that he should check if the samples contained any radioactivity (in those years fluorescence probes were non-existent). He panicked saying “my boss will kill me if I do so!”. That continued for a year. Eventually, he got a different project with which he finished his PhD. But he never knew what those samples were or what for.

Since then, I have seen “supervisors” (neither super nor visors) taking the credit for their students’ work, even getting patents without even mention any of this to the people who did the work. I have seen that the work of a student was taken and given to another student (a favourite) to graduate, while the first student was virtually kicked out – to make that story even worse the first student was a foreigner and the 2nd a national. I have seen a supervisor who will force her students, even a postdoc, to babysit her children while she was going out (rather often), and that lady (not her real name) also did not allow her students to talk with other people, being “distracted” or have friends. They all lived in terror and fear as she would not hesitate to punish them or kick them out of her lab. She used to tell these students that they owe her so much.

I know principal investigators (PIs) who make their students to sign “contracts” where they clearly state that the boss is the boss and cannot be questioned, female students cannot get pregnant, and that must be available/reachable any time of the day or night – all these are illegal by the way. Also, I have seen cases like my friend Frida (not her real name) who in 3 years has met her boss as many times!. Her boss lives in on the other side of the Atlantic, and he believes that he can supervise her via skype. Another friend was as a postdoc in some lab where the boss just screamed at them that they were stupid and lazy every single time she did not have answers to the many questions PhD students or postdocs had. This is sadly not that rare, I recall Nataly (not her real name or gender) who always claimed to be the only person with ideas, when other(s) came up with any idea, that person was quickly shat on (bullied) just for the idea to be stolen and sold as her own at later times. Finally, recently I heard of a postdoc who wanted to apply for a grant (Sonata) and needed his boss permission, who refused and instead asked him to write a grant proposal (Opus) for him (the boss). And the list could go on and on…

In my experience, all the young students that begin their careers in science are full of expectations and ambitions. On their lab coats they should have signs saying “contains dreams, treat with care”. I could probably add “keep out of reach of dreamkillers”. The reason why most of us have studied life sciences is because we have an intrinsic curiosity. We would like to make things (or patients) better. And we would like to understand, and sometimes solve, important problems that until now have no met proper solutions. Somehow these dreams, in most people, wane over time, other times they are brutally murdered by dreamkillers. Those of us who continue having a “childhood attitude” are often considered odd, eccentric, unserious, or even stupid. But it is those dreams that has taken us this far, why to stop now?, why not see research like the “good old days” of exploration of uncharted territories or planets, the climbing of the highest mountains or reaching the bottom of the oceans? 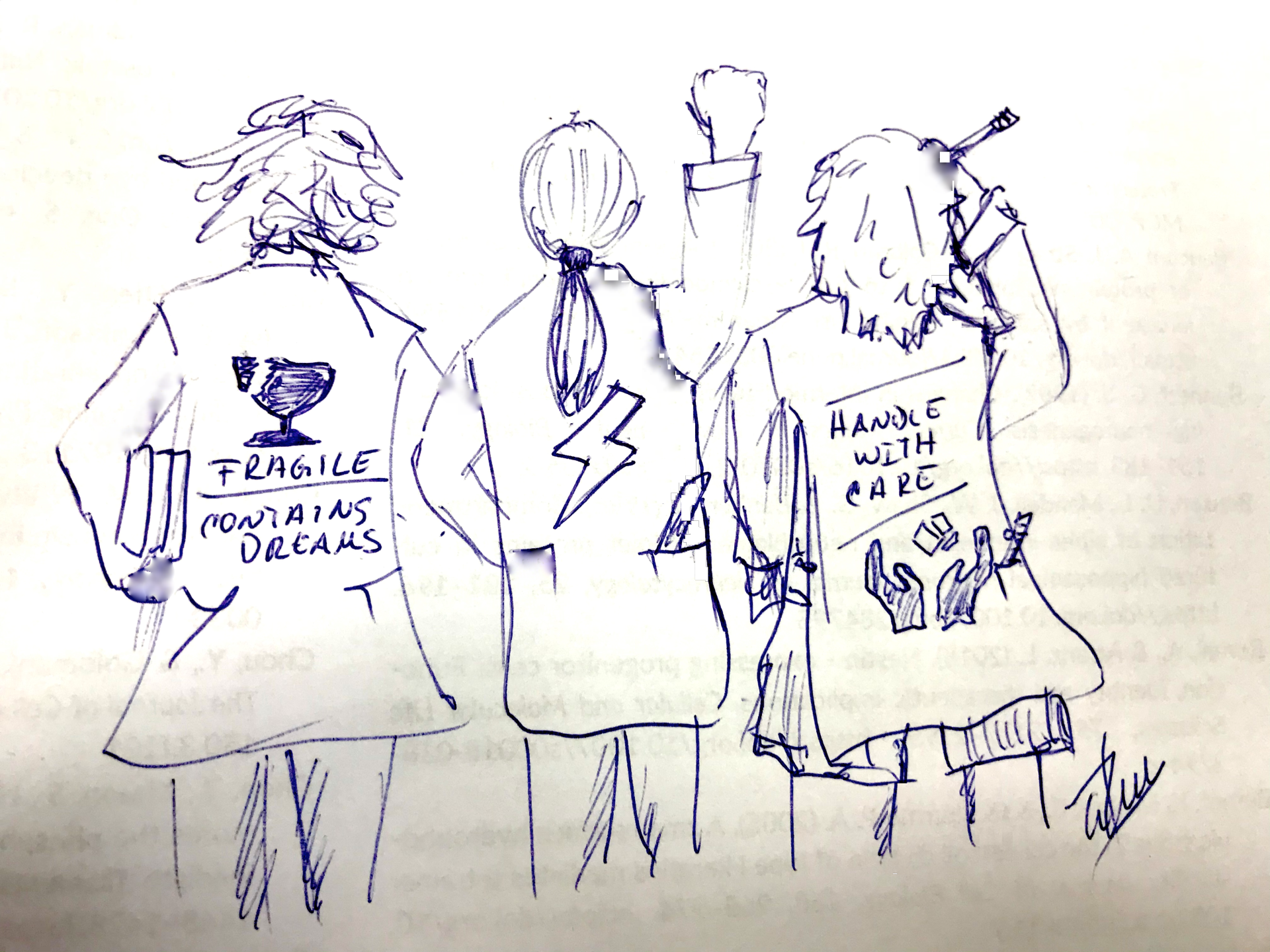 Who are the dreamkillers? These are people with serious self-confidence issues. Some feel threatened by their students and by other scientists, and as a response they try to crush them. They hate to be questioned and, when possible, they love to use their micro-power (just like their micro-other-parts) on those they feel below them but they are soft like marshmallows to their superiors. Classical bullies in other words.

Some of the dreamkillers were exposed to dreamkillers themselves, maybe even dynasties of such, and thus they might feel that the next generation must suffer the same treatment. They usually run labs where archaic methods are used and they never take a risk or move forward. People working in those labs are usually abandoned to their fate and blocked to try to advance further.

Some dreamkillers are highly successful scientists though, like most tyrants and dictators they also fanatically self-centred. They build personal recognition upon the carcases of students and postdocs sacrificed for personal benefit. These are the most difficult to detect, and they will probably portrait themselves as scientific heroes and leaders. They will surely squeeze you like a lime for a mojito, but most importantly they do not care about you or your career. While there is a thin line between a boss who pushes you to improve to become a better scientist, and those mojito-makers - the difference is the long-term effects on your career. Dreamkillers are nevertheless the biggest complainers and ultracrepidarians, the most envious and nasty creatures (not their real names) I have ever encountered, as they find pleasure in blocking, if possible also humiliating, others who do want to do something with their lives.

I expect all my students to be better than myself in the long run. They have more tools to do so that my generation ever had. I would be proud of them if they do well, and it would look great (selfishly) that such person came out from my lab.

Dear students, get this, you do have choices, you can either lock yourselves into dreamkillers’ labs and become mirror-copies of them, OR you can do something about it. There are progressive labs, and there is a whole World out there of researchers who want to do great things… do not succumb as the damage might be irreversible.

All this reminds me of one day when I was teaching and some guy busted into the room to rudely demand that I must finish 15 minutes ahead of time as his class was next and it was “very important”. I (politely, of course) asked him to leave the room, locked the door from inside and continued my class. I, in fact, finished a few minutes ahead of time, so I told students “this is one of the most important lessons I will ever give you”. I quickly searched the internet, placed the lyrics on the screen and asked students to sing along as loud as they could “we ain’t going to take it” (Twisted sisters), accompanied by the computer’s speakers… we ended up over a minute late. As I opened the door I found an angry face as anti-mirror to my smile. The lesson was simple “do not let anybody step on you”… BTW, I also switched the projector off.

After all, you young scientists are the ones doing the work, without you the bully dreamkillers are no more. Young scientists have the strength to make real changes… whenever they show up, as I have been waiting for over an hour for my lazy students to clear the snow from my driveway, iron my shirts and polish my armour!

Adolek (not my real name)

Adolek is a laboratory gladiator at the Dept of Biochem and MolBiol, Medical University of Lublin.
More info

Did you liked it?
Check Adolek's previous articles:
HYPOTHESIS-DRIVEN RESEARCH
WHERE IS ALL THE EQUIPMENT?
A LIFE IN SCIENCE